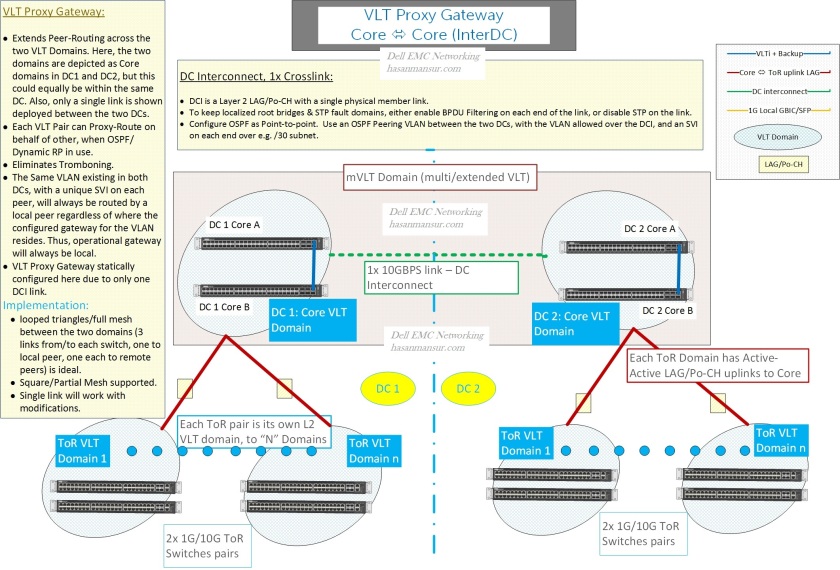 Traffic Profiles & flows in the DC

There are a variety of traffic profiles & flows within the DC.

DC interconnect itself could be Layer 1, 2 or 3. We will look at it in more detail further down the post, but by way of a quick overview,

Let us look at the Tromboning aspect of a Layer 2 DCI.

Tromboning happens if for e.g. a VM migrates from its original (e.g. DC 1) to a second (DC 2) location. While It comes up with the same IP address and VLAN membership as before, its gateway however, continues to be in DC1. So now, the traffic from the node has to travel back to site A gateway, to route outwith. (Additionally, its subnet could/would also keep getting advertised from DC 1).

This is where Gateway Localisation comes into the picture. Dell EMC Networking’s Proxy gateway achieves this by having one VLT pair , proxy-route on behalf of a second VLT pair. Proxy Gateway happens between VLT domains, as opposed to within.

When this function is applied within a DC, it is known as Peer Routing – The two Peer switches will proxy-route on behalf of each other. The alternate to peer Routing will be VRRP. The considerations in choosing one over the other (within a DC) include:

Note again – Peer Routing vs. VRRP is a choice executed within a DC. VRRP is not a consideration for use with Proxy Gateway between the DCs (The two are mutually exclusive).

Back to proxy gateway – All 4 switches, 2 each per VLT domain, in 2 VLT domains – can proxy-route on behalf of each other. For a given VLAN which stretches between two DCs – While the VLAN exists in both DC1 and DC2, for any given host in a VLAN, regardless of which DC it is located in and which gateway IP address (from between the four L3 boundary switches, a VLT pair per DC and two in total) it uses, its traffic will always be routed by the L3 boundary switch which receives its traffic. This becomes particularly attractive with workload mobility, movement and vMotion in mind.

In it’s respective CAM table, each peer creates a local destination address entry (in addition to its own MAC address) for the peer’s MAC address, which is how it ends up routing on behalf of the peer, regardless of whether the gateway points to the other switch. On the host, one can configure any gateway address from the ones being used by the peers on the respective VLANs.

There are caveats with the use of Proxy gateway, and questions to consider. for e.g. If the original gateway goes offline, the peer doing the proxy on behalf of the gateway will cease to answer ARP on gateway’s behalf. If a node needs to renew the ARP entry at that point, it will be without a gateway.

Over time, further enhancements and/or alternates to Proxy Gateway functionality may  become available. e.g. A VRRP based solution using a VIP/VMAC default gateway on a given VLAN, between the two VLT domains in the two DCs, (similar to Cisco HSRP/extended subnet mode between DCs). ACLs on the LANe interconnect will restrict VRRP hellos/exchanges, similar to HSRP filtering that happens on the DCI.

The other available option/alternate to Proxy Gateway is the use of VRRP between the 4 switches in the 2 VLT domains – Note however, that this will not be an active Master per DC (with VRRP control frames filtered on the DCI), rather one master across both DCs (and the rest, slaves) – consequently, tromboning in this model will be applicable.

Also, one could configure Peer routing in one DC and VRRP in the other.

Going back to the discussion around DCI in general and Layer 2 DCI in particular, there are other challenges with L2 DCI, which result from the fact that the location of server/app may no longer be accurate as a result of move. Typical ways to get around it may include LISP, DNS redirection etc.

A variety of DCI services exist. These include

My Tweets
Join 287 other subscribers